In 2001, Rome officially declared its feral cat population, which numbers around 300,000, to be an integral part of the city’s historical and cultural patrimony. Whether they are casually sunning themselves on 2000-year-old plinths in the Forum or prowling around the ruins of Pompey’s Theatre, the cats that charm locals and tourists alike are considered part of Rome’s “bio-heritage,” and have been revered since antiquity for protecting citizens from infestations of rodents and rodent-borne diseases. 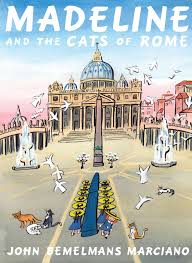 John Bemelmans Marciano (Ludwig Bemelmans’ grandson) pays homage to both the Eternal City and its beloved feral felines in Madeline and the Cats of Rome (2008), an ink-and-watercolour picture book for ages 3 and up. Miss Clavel and the “twelve little girls in two straight lines” travel to Rome to escape the chill and rain of Paris (and they stay at the exclusive Hotel de Russie, no less!), but trouble ensues when a young thief snatches Miss Clavel’s camera. With paintings and verses highly reminiscent of his grandfather’s, Marciano tells a story that includes a pleasing hint of the Gothic and a denouement that smacks of wish-fulfillment for any animal lover. While i gatti di Roma do not all need to be adopted and taken home by tourists (spoiler!), this is a fun read. Lumina and I think that Madeline and the Cats of Rome is both a satisfying supplement to the original Madeline series and a delightful armchair travel adventure. 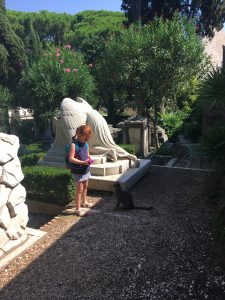 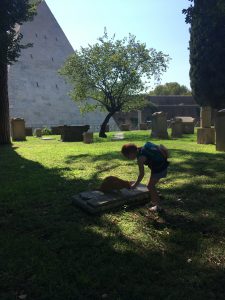 At the Protestant Cemetery in Rome, Lumina made friends with some of i gatti della Piramide, cats of the Piramide colony. You are not supposed to feed the felines (oops), but the cat sanctuary welcomes visitors, volunteers, and donations of cat food and medicine. And yes, you can indeed adopt un gatto romano, either “by distance” (sponsorship) or by actually taking one home. (But please, for the love of everything, don’t tell this to Lumina. I’m allergic to cats.) If your adoptee is a kitten under three months old, the process of bringing him or her through Canadian customs is simple. The hardest part will be choosing a name; Marciano suggests “Cacciopepe” for a “spotted kitty.” Miao!

Previous Post: « Lumina’s Top Ten in Rome
Next Post: Are You Ready for Roma? Climbing the Dome of St. Peter’s Basilica »