When Lumina was three days old, I looked into her newborn eyes and promised to bring her to Rome someday.

They say that three-day-old humans don’t smile, but I swear that Lumina did when I made this promise.

I went to Rome – alone – when Lumina was two, and again when she was three, but it wasn’t until the year she turned four that she realized she was missing out. “I’m ready for Roma!” she insisted, arms crossed and a scowl on her face as she watched me pack my suitcase, deeply offended that I wasn’t bringing her with me. We’d agreed, though, that she needed to be able to walk a lot without complaining or asking to be carried before I’d be ready to bring her to Roma, and she wasn’t at that point yet.

But as soon as I returned from my trip, she began a campaign to prove she was big enough to hit those Roman cobblestones. If we took a long walk, she invariably pointed out that she was not complaining. If we spent an afternoon exploring a local museum, she made sure I noticed that she wasn’t asking to be carried. She and her four-year-old legs were definitely ready for Roma.

And so Lumina was more than vindicated when, at five, she not only trekked all over Rome without complaining—in the heat of August, no less—but also gamely climbed all 551 steps up the dome of St. Peter’s Basilica without so much as a pause. Smirking a little at the adults flattened out against the wall letting others pass as they caught their breath, Lumina exaggerated the spring in her step and didn’t stop until we’d reached the very top. (I had to push myself to keep up with her, believe me.)

As we enjoyed our panoramic view of the Eternal City, Lumina gave me a bit of side-eye and commented, “See? I told you I was ready for Roma.”

If you and yours are ready to climb the dome of St. Peter’s, we suggest you arrive early to beat the crowds and line-ups. (This is always a good idea in Rome.) The basilica opens at 7:00 every morning (with the line to get through security as short as you might imagine it would be at that hour), and the entrance to the dome opens at 7:30. 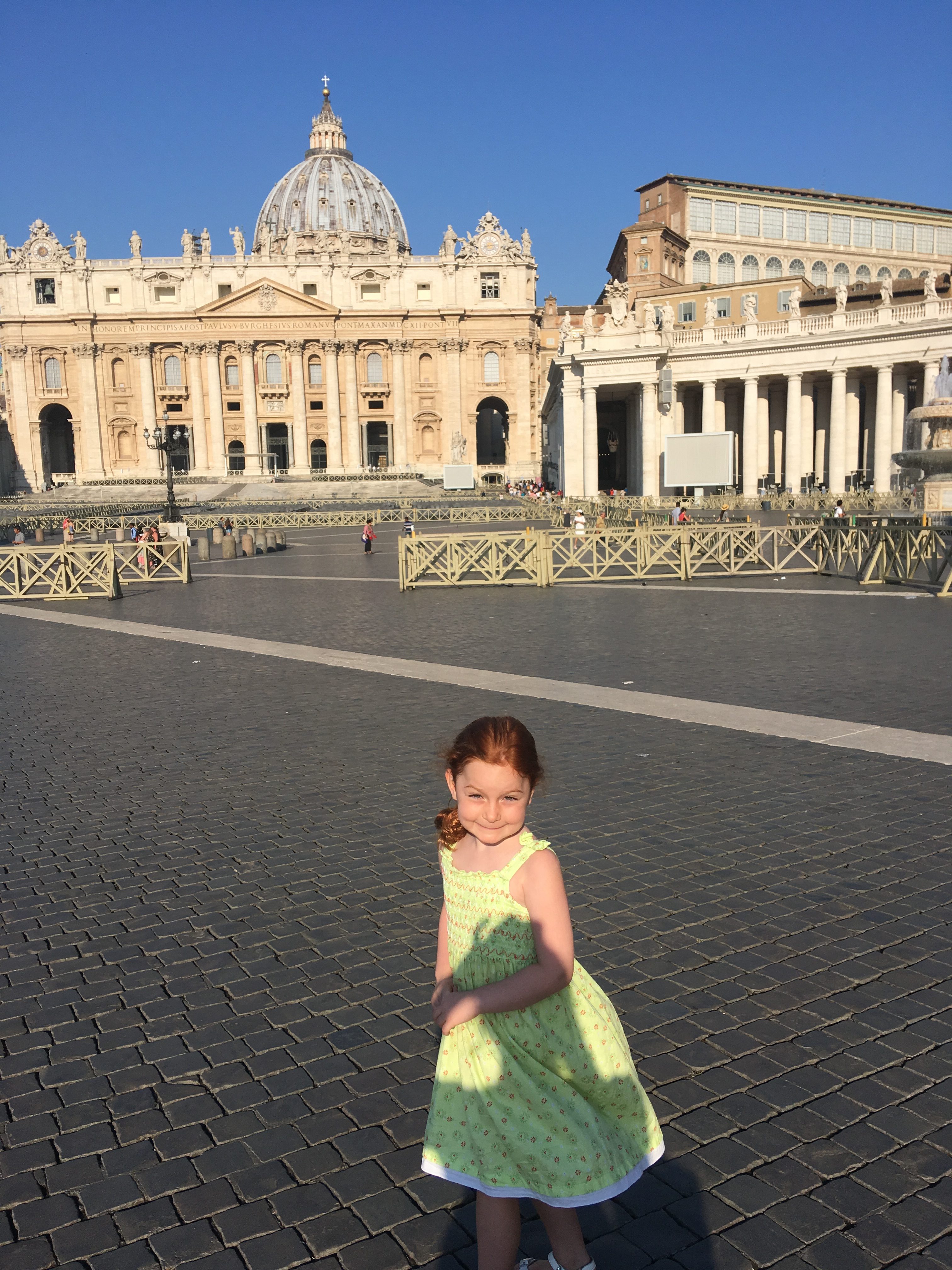 Make sure you dress appropriately – you won’t be allowed in if your shoulders or knees are showing. (Imitating me, Lumina covered her shoulders with a silk scarf inside the basilica, though this *usually* isn’t necessary for small children.) 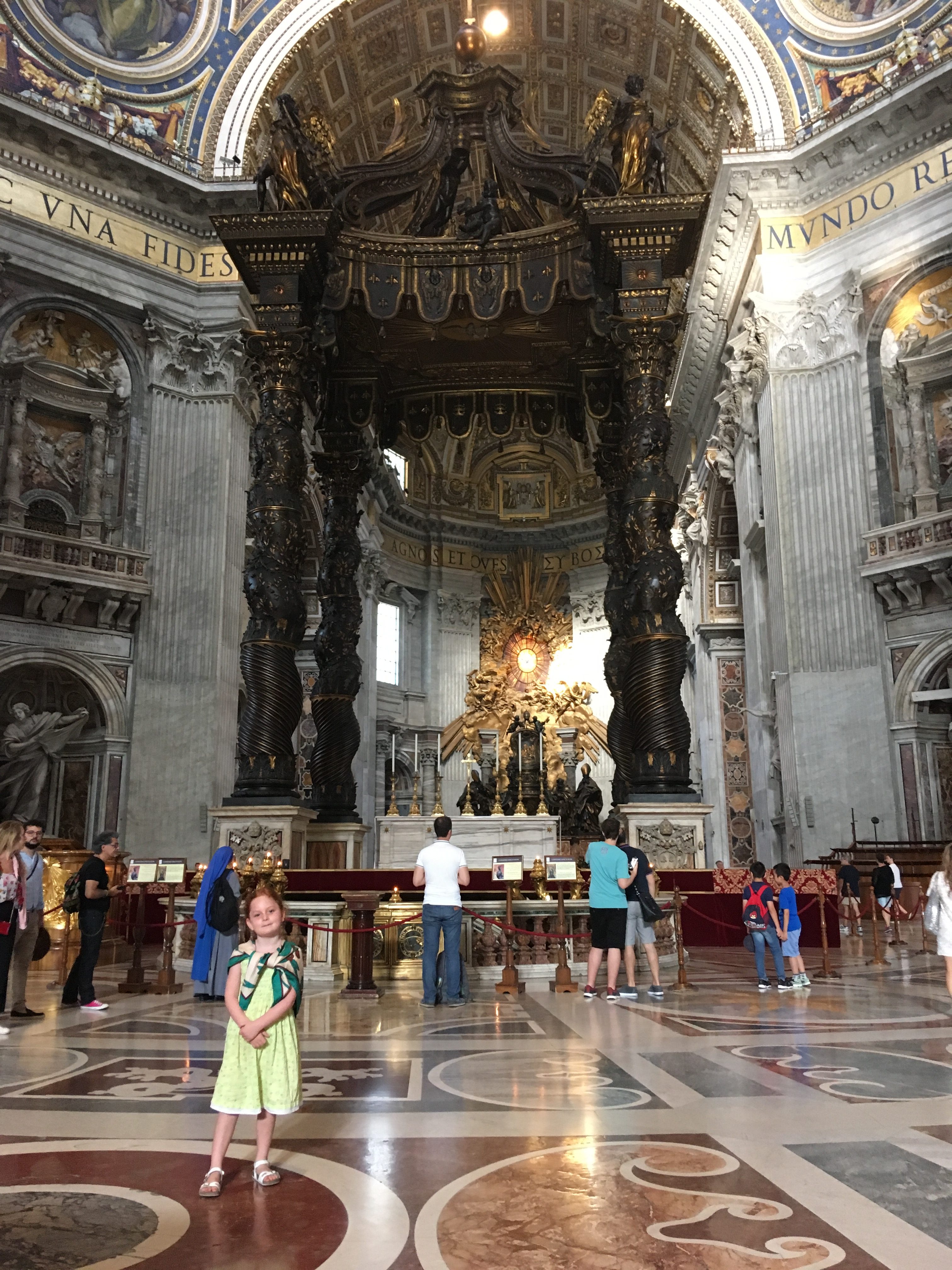 The entrance to the dome is just past the colonnades of the basilica, to your right. (Look for the sign that says “Cupola.”) You have the option of taking an elevator to the rooftop terrace and skipping the first 231 steps up the dome, or walking the whole thing (which is more fun, if you’re able). The terrace is actually our favourite part, best saved for the way back down as a reward for completing the climb. Here you’ll find restrooms, a nasone for filling your water bottle, a gift shop, and a café where you can enjoy a well-earned gelato. 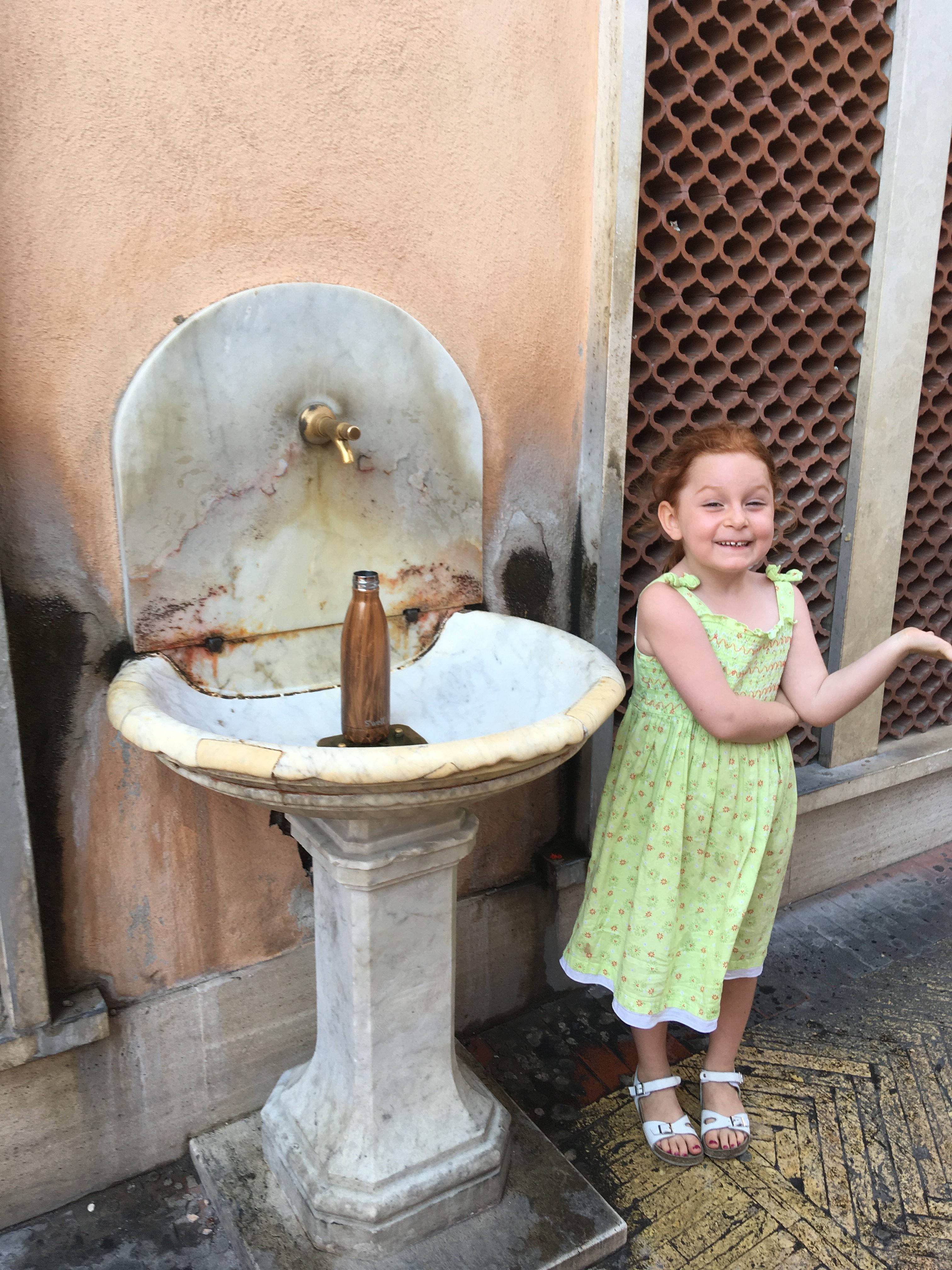 You are now standing on the rooftop of the world’s finest work of Renaissance architecture, designed by the likes of Bramante, Michelangelo, Maderno, and Bernini . . . 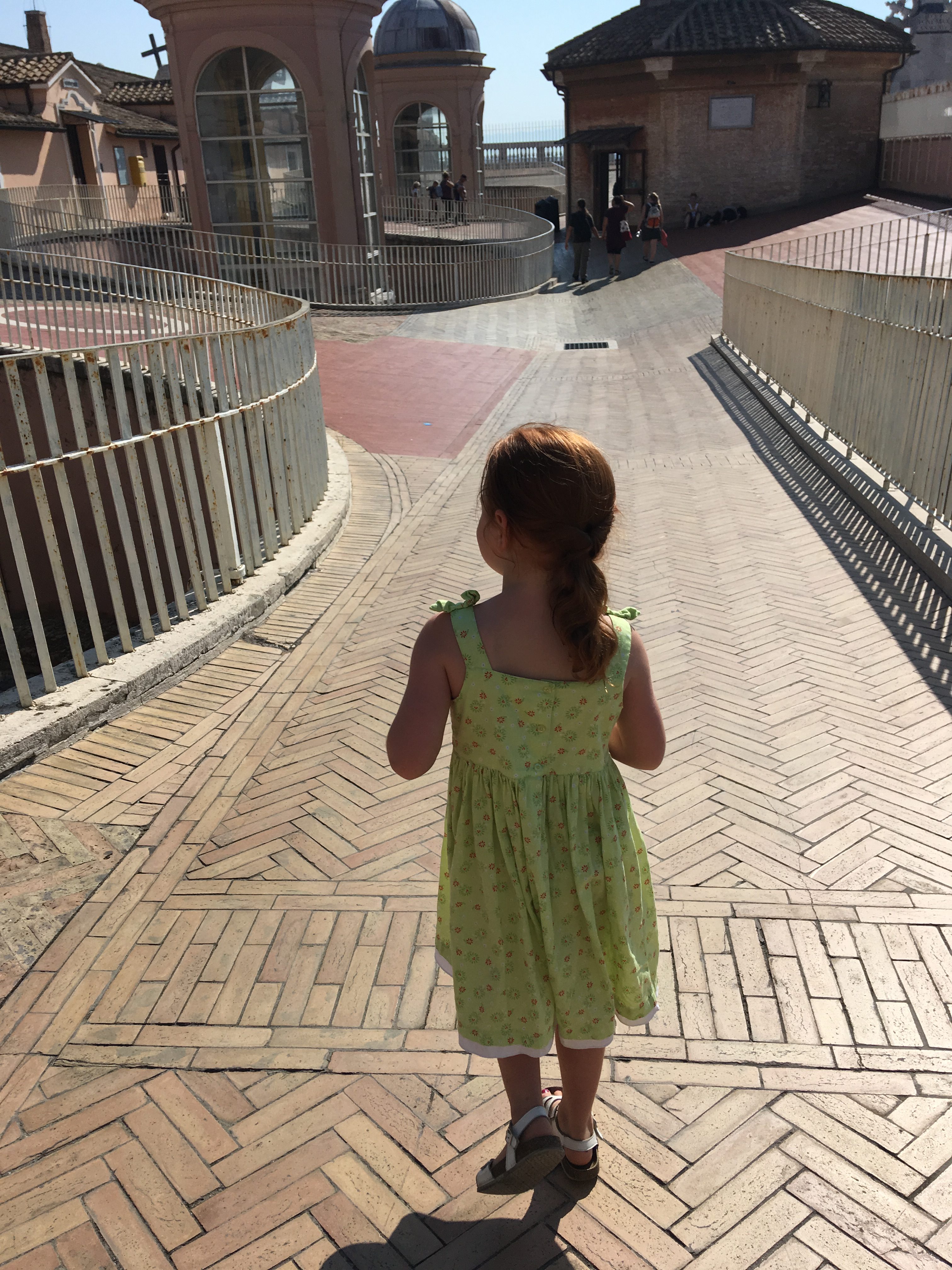 . . . so even if you’re not religious, you may want to pick up a few postcards from the gift shop. Once you’re back down in Piazza San Pietro, buy stamps from the Vatican post office (it’s on the south side of the piazza), and drop your postcards in one of the bright yellow Poste Vaticane mailboxes. The famous 00120 postmark will make this an extra-special souvenir for whoever you’re missing back at home. 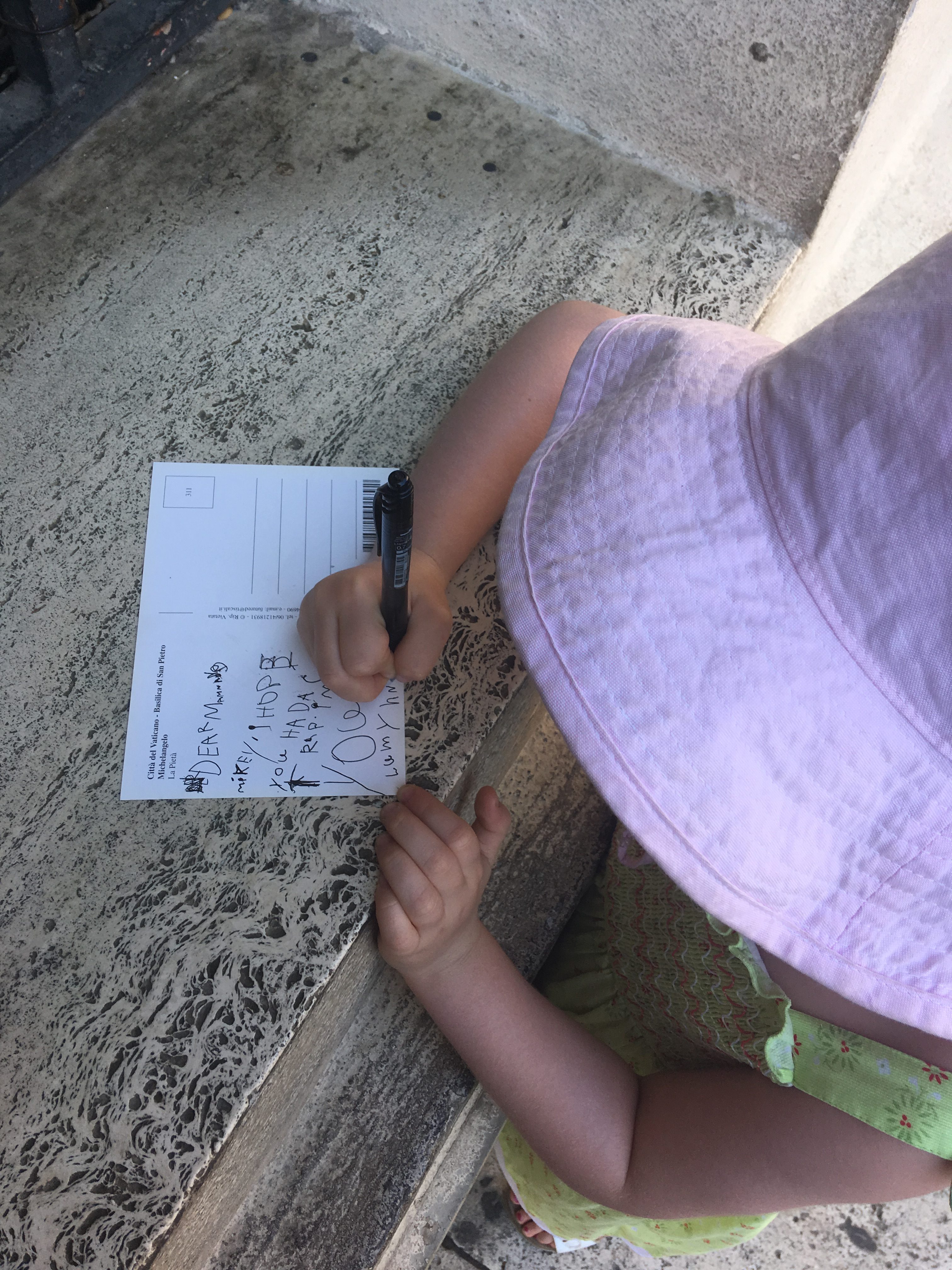 Wish you were here!

How Much: There is no charge for admission to the basilica. Tickets to access the dome are 8€ if you want to climb all the stairs, or 10€ if you’d prefer to take the elevator partway up. Children taller than 1 metre pay the same ticket price as adults (and I strongly advise not making this climb with very young children).

Why: So many reasons, but not least of all for the bragging rights once you’ve climbed (without complaining) to the tippy-top of the world’s largest church.* And if the 551 stairs don’t take your breath away, the bird’s-eye view of Rome most certainly will.