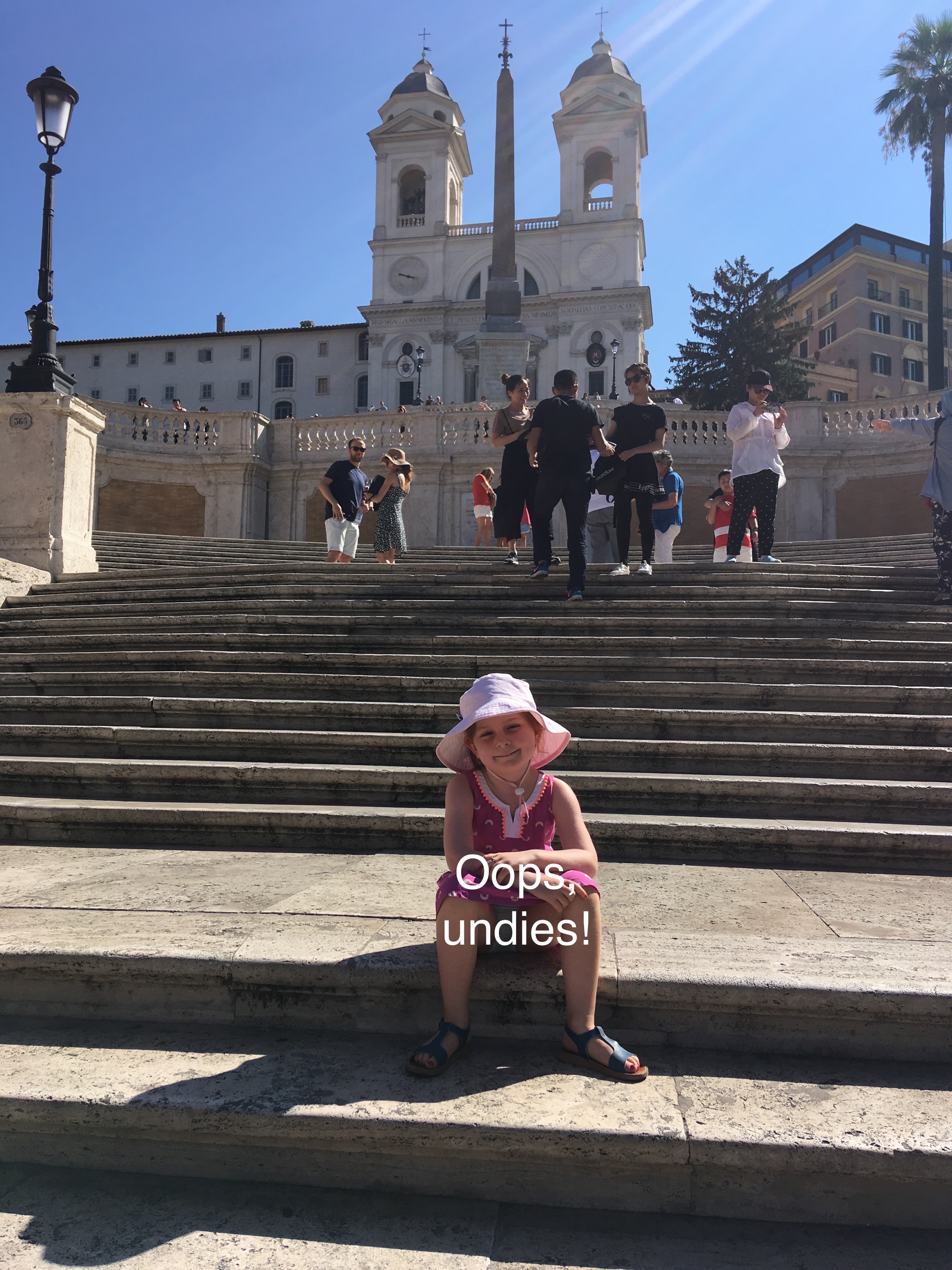 No, no – not the flashing (especially when you’re only five years old, geez). While Audrey Hepburn ate gelato sitting on the Spanish Steps in Roman Holiday, and I – along with millions of other visitors – have done the same, now simply sitting here to rest and take in the view over Piazza di Spagna is a fineable offence. With visions of Audrey as Princess Ann dancing in our heads, Lumina and I aren’t sure how we feel about this.

Colloquially called the “Spanish Steps” because the Embassy of Spain to the Holy See is located at the foot of the stairs, this monument is officially called the  Scalinata Trinità dei Monti (the “Staircase of Trinity on the Mount”) after the late Renaissance church at the top. The Italian jewelry company Bulgari recently sponsored a 1.5 million Euro restoration of the Scalinata, and when the work was completed in 2017, Bulgari requested that a gate be installed to protect the travertine steps from tourists. While city officials did not comply with this request, they did agree to start enforcing a largely ignored 2012 ordinance against food and drink on the steps. Since travertine has a porous quality that allows liquids to seep in and cause stains, it does (sadly) make sense to prohibit snacking on the steps, but the July 2019 prohibition against sitting seems to go too far. 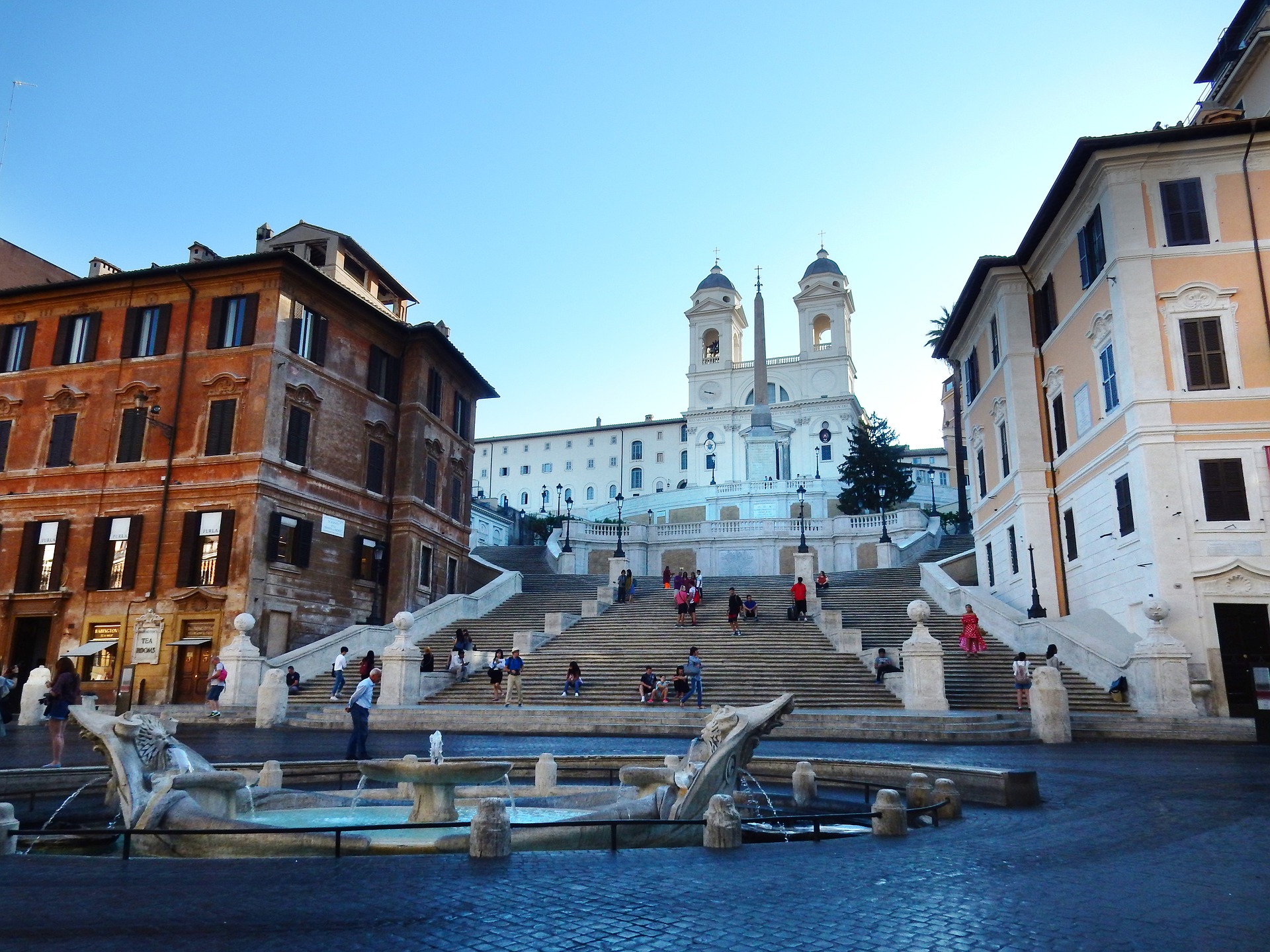 Or perhaps it doesn’t. In another scene from Roman Holiday, children play in the Trevi fountain and hang from its marble seahorses as if they were monkey bars – behaviour that is now unquestionably inappropriate (and illegal) for the obvious reason that it can cause extreme damage to the fountain. I don’t see how sitting on the very sturdy Spanish Steps can be harmful, but I do see how seemingly unreasonable rules point to the problem of over-tourism in cities like Rome. While the Spanish Steps are one of a kind, Rome is far from the only city in Italy with a gorgeous staircase overlooking a beautiful piazza – and on most of those other staircases (which I am making a mission of finding and sharing with you on this blog), you can sit – and even eat gelato – to your heart’s content. Perhaps if we spread out a little more, reducing extreme influxes of visitors and therefore the potential for harm to monuments, we’ll see fewer “unreasonable” restrictions in the future. 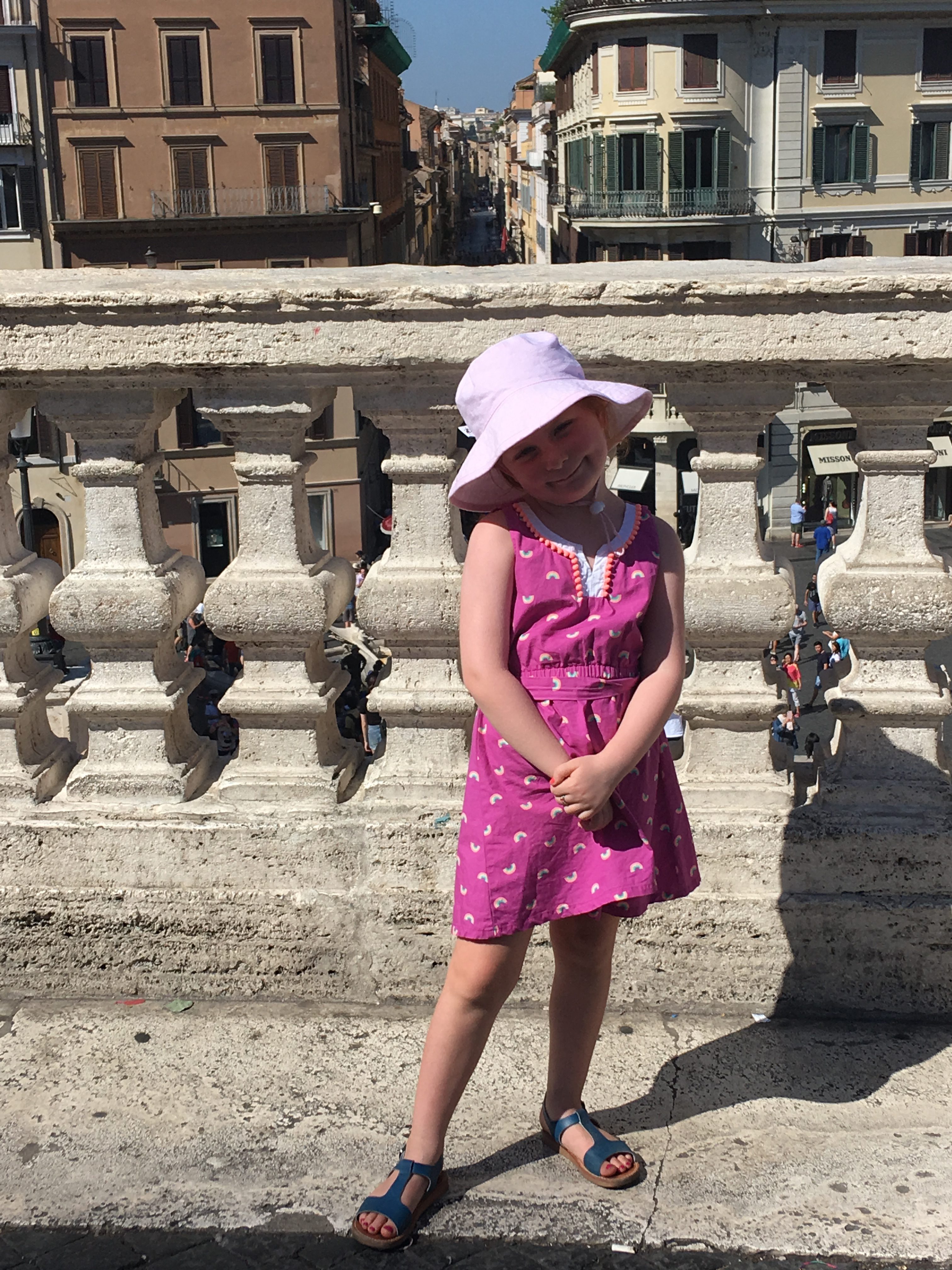 In the meantime, don’t sit down on the Spanish Steps unless you have 400€ burning a hole in your pocket (though it’s still legal – so far – to pause on the steps for a photo, like Lumina does above. Bonus: reduced risk of flashing your undies). If you need a place to rest your weary feet near Piazza di Spagna, why not stop in for a(n expensive, but a fraction of the cost of a fine) treat at the iconic Babington’s tea room?

Previous Post: « Canova in the Clouds
Next Post: Escaping the Noise and Crowds of Rome: Babington’s Tea Room, Rain or Shine »